Sustainability has been our focus since 1958. What started in our parents' horse stable in northern Germany has developed into a company that stands for timeless design and quality worldwide. Every Shopper® is still conceived, handmade and tested in northern Germany.

Beginnings in the parental horse stable

In 1958, during the economic boom, the married couple Günter and Christa Andersen decide to distribute rolling shopping bags. The idea came from their long-time friend and business partner Morten from Denmark. In the beginning, the Andersen couple is ridiculed for this idea, but with the first order of 25 Shopper®, at that time still called market trolley or shopping trolley, success comes. They started selling the shopping trolleys as wholesale goods under the brand name GÜNA. But the couple soon realises that they can also produce the rolling shopping bags themselves. With a bit of luck and slyness, Günter Andersen gets in touch with a steel supplier. From then on, the tubes were sawn and bent by hand and the first Shopper®, which already had the characteristics of today's Shopper®, were born. 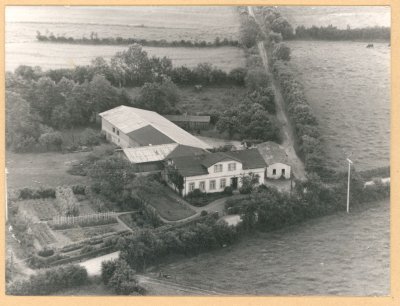 The demand for the rolling bags is so high that the horse stable becomes too small for the increasing production over time. The entire company moves to a larger production hall in 1962 and hires its first employees shortly afterwards. In order to market the products, Günter Andersen travels from one hardware and household goods shop to the next in the early years. This is not only tedious, but also expensive in the long run. Advertisements in the respective trade journals and visits to trade fairs ensure the international breakthrough. The demand for Shoppers® from northern Germany continues to grow so rapidly that in 1968 the company moves again, this time to its own 800 m2 production facilities. In the years that followed, the company continued to expand and production was switched to a mixture of manual work and semi-automation.

The trump card of the Andersen Shopper® is still the excellent quality Made in Germany and a sophisticated technology. Thanks to the design-oriented design of both the frames and the bags, the demand from younger society also increases. The brand name Andersen is coined and displaces the original GÜNA in 1986. Since 1998, the company has been trading under the name "Andersen Shopper Manufaktur". Andersen still develops its bags with its own designers and has them sewn in smaller sewing factories in the GDR in the beginning and later in the FRG. After reunification, the textile industry in the FRG collapsed and competition concentrated on Eastern Europe and Asia. Today, the bags are sourced from different parts of the world.

Sustainability and safe working conditions have always been a matter close to the Andersen couple's hearts, and this continues to shape the focus of our activities today. Not only that the use of the Shopper® is sustainable. The long durability and service speak for a sustainable company philosophy.

Sustainability as a corporate philosophy

This is why the production of bags made from truck tarpaulin was already being promoted at the beginning of the 90s. Long before the topic of upcycling or recycling materials became an issue in the textile industry, the Anderesen TRUCK Shopper® were a success. To this day, the unique items are appreciated by retailers and customers.

The Shopper® continues to enjoy popularity. In 1995, a new area opened up for the Andersen Shopper Manufaktur in terms of sustainability: the bicycle market. Initially, the bicycle and leisure trolley was used as a transport scooter, but the demand for a Shopper® on a bicycle also increased. The boot for the bicycle develops and since 2000 a large number of the Shopper® can be attached to the bicycle by means of specially developed couplings. A flexible companion for everyday life and leisure that protects the environment.

Cooperations in the sense of sustainability

Andersen Shopper® Manufaktur is not the only company that attaches great importance to quality, durability and sustainable products. Over time, diverse and long-standing cooperations have been formed, especially in the production and design of the bags. Today, Andersen Shopper Manufaktur works together with well-known brands from the bicycle sector Basil and Ortlieb and continues to develop the Shopper® bags especially for use on bicycles. Another long-standing cooperation partner is the bag manufacturer 360Grad from Hamburg, which produces bags from used canvas and thus ensures the reuse of used materials.

In over 50 years, 10 million shoppers have been sold worldwide. You can download the chronicle of 50 years of Andersen Shopper Manufaktur here: